Hackney Wick during the Blitz by Matt Woods 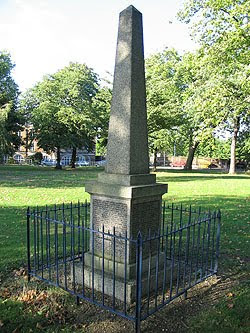 Seventy years ago today, London came under fire from the Luftwaffe, with bombs raining down on the capital, in what became known as the Blitz, during which 43,000 civilians were killed.

Today I discovered on this day, 7 September 1940 (first day of the Blitz), Hackney Wick suffered three German bombs, including an explosive bomb, which landed on Prince Edward Road, damaging the road and three houses. Other bombs landed just outside what is now Leabank Square by Gainsborough School and on the industrial buildings just by the canal.

I also found this account of “Hackney Wick at War”, on the BBC website, an account by Frank Munns of his wartime experiences (as told in 2004):


“I was not quite two when the war broke out. We lived over the bike shop next to the White Lion pub. My earliest memory must have been about july 1940 (just after Dunkirk ) when i can still hear my father saying that if "they" got here he would shoot me , mum and then hinself. Luckily that didn't happen.
WE used to shelter in the cellar of the pub at first but later on we used a shelter cut into the bank in Eastway next to St Mary.s church .On one occasion we were all inside completely oblivious to what was happening on top ,it seems that the top was getting a right pasting but we felt nothing.
Dad was called up into the REME and ended up in India .Mind you Our neighbours The Knowles family didnt, see their dad for the whole of the war .He spent it all in the far east.
All through the war4 Harry Thirkettle kept the forge opposite our shop going and I spent hours watching him shoe horses.
As the war progressed we began to see POW's ,Italians in Victoria park And Germans out on Waterden road.
I went to Gainsborough Road School (who recalls Mrs Sneddon, Mr Reynolds (polly),mrs Cray and mr Evans?) and played in Victoria park .In the park earlier on was an AA unit but later in the war we had the infamous rocket guns ,the ones that caused panic at Bethnal Green Station. I saw them go off one night ,no firework display that I have seen since has been more awesome.!
My mates at that time were Jimmy & Terry Knowles,Harry Strutt,Roy Garnham And Albert Highinton. Where are they now?
Throught the war Mum kept our little shop going and in !944 the front got blown out by a V2. We were away in Northampton at the time where I witnessed sheer panic when the only flying bomb to get to that town turned up and no one in the street where we were staying could find the key to the Air Raid shelter.
In 1945 I woke up one morning and Mum said "Its All Over " my reply was "Does that mean that we'll not get any more news on the wireless?'
We like many ,many others had had a rough time ,there were acres of bomb sites to play on and we lost some good local people .Thankfully as far as I could tell all the servicemen in our part of the Wick returned. My Dad, Jimmy,s Dad, Jim Dewis ,one of the first paras.and Mick Thirkettle from a POW camp but regretably minus a hand.
Parties and bonfires marked the end and the scar of the bonfire in Chapman Road was still visible in the sixties”.

If anyone knows any of the people named in the article or their descendants, it would be great to hear from them so we can build a history of Hackney Wick at War to preserve those memories and accounts for future generations and perhaps even make some kind of permanent tribute in the Wick to those in this area who gave their lives for King and Country.

The Blitz interactive map of London is available on the Guardian online website http://www.guardian.co.uk/uk/interactive/2010/aug/26/blitz-first-day-second-world-war)

Hello Matt, thanks for remembering the Wick during the blitz. I must admit, as a 5 year old, I thought it a bit exciting. But many Wickers didn't make it, so thank you.
Jeff