Beating The Bounds - Great Day Had by All! 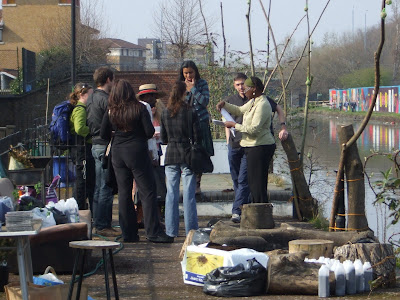 The sun was shining on the Wick, and there was not a cloud in the sky as we embarked on our history walk with the wonderful storyteller Diana Olutunmogun. Thanks too to Lisa Rigg from Hackney Society for organising the walk and Elisabeth from Hackney Archives who supplied us with amazing photos and information of the Wick from days gone by.

We were a bit light on crowds, but despite this, a really pleasant and fascinating afternoon was had by all.

Beating the Bounds was an ancient tradition where people of the Parish would come out to walk around the boundary of the Parish. This would usually occur 40 days after Easter. People would take notes of hedges, streams, ponds, and even big trees. This was a time before maps, where it was especially important to show children these natural landmarks in order to keep them safe and familiar with their Parish boundary.

The walk started here on our very own riverbank in Leabank Square. We have residents who have lived here since the very ‘beginning’ of the completion our Square (1989). But did you know that our canal was a hub of activity during the Industrial Revolution? The Wick was a very industrial place and the canal was a vital mode of transport for all the factories that needed to transport material and goods around London and beyond.

Now, how often have you walked past our neighbours Atlas Wharf? Well, did you know that it was here that Arthur Green discovered a yellow dystuff called Primuline. The workers in this factory would have worked in a very perilous environment, as these dyes were toxic and breathing in the fumes would have made them very sick.

Next stop was the blue plaque, which I’m sure most Wickites quote when asked what Hackney Wick is most famous for – Plastic! Yes it was here that one of the worlds’ most famous materials was created and it was called Parkesine after the person who invented it, Alexander Parkes.

Another invention which may not be too obvious (no blue plaque!) was petrol. It was in White Post Lane that William Leonard and his partners’ pioneered petrol. The most intriguing thing is that they decided to call it Carless Petrol – a combination of names of the people involved in the invention. Elisabeth (Hackney Archives) showed us a wonderful black and white photo, which showed the company cars with the advertisements for Carless petrol on their sides.

Stop 5 was just beside the old Queen Victoria pub where in the 1800s stood a beautiful mansion, Old Wick House. Hackney Archives hold impressions of this house which suggest a very grand old house indeed. There was a stream with mature willow trees, a bridge and lots of green space. This mansion belonged to Colonel Mark Beaufoy, who in 1821 set up in a hot air balloon from his garden and made it as far as Colchester!

Perhaps the biggest treat of all came when we reached stop 6 on our tour map – St Mary of Eton Church. This was where Alan Piggot (Vicar of St Marys’) told us about how the church was set up by the Eaton Manor Boys – a group of wealthy Eaton college boys who wanted to do good for the poor of East London. We were then given an ‘unofficial’ part of the tour by being allowed to climb to the top of the church tower and absorb the wonderful panoramic views of the Wick! This was such a treat and it was so interesting to view the Wick from such a different perspective. Thanks again to Alan for this pleasure!

Last stop were the Old Baths. Now housing our community centre, this was where in days gone by locals would have gone to get clean! Bath Houses were considered an essential public service in the early 1900s. Many Londoners did not have access to their own internal water supply before WW2. Percival Holt changed this for the people of the Wick when in 1934 the Gainsborough Rd Public Baths were opened. Holt was a true visionary who brought past locals a much needed service, with slip baths and a laundromat.

The circular walk ended back on our riverbank, where we enjoyed one of the best banana cakes we had ever tasted, courtesy of Lisa Rigg who bought the cakes from Veneti’s Coffee Shop on Chatsworth Road. All in all, a fantastic way to spend a Saturday afternoon in the Wick!

This short walk reminded us that we live in one of the most interesting and unique places in London today – a place which is going to experience some of the most profound changes it has seen, perhaps since the Industrial Revolution. The beauty of this circular walk was to highlight the aspects of our area that we may not be aware of. Buildings, people, ideas have come and gone. Sometimes legacies can vanish just as quickly – that’s why it’s so important that we all participate in forming the new changes coming our way. Hackney Wick is changing and we can all have say in how our story continues!

It sounds like it was a great day out! I am gutted I was on duty here at Homerton on the day.

Hello Sóna
Another excuse from me I'm afraid! Basically - with the new baby - we are both a bit pooped nowadays.

But it looked like fun was had by all.

Maybe Nadira could put her notes together - and do one for those of us who missed out?