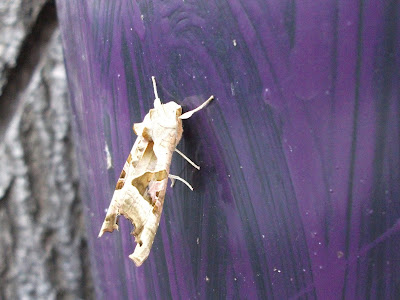 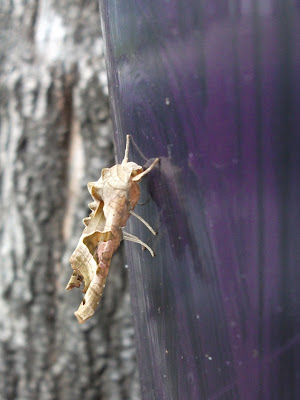 The tongue twisting Latin name for this Angle Shades Moth is Phlogophora Meticulosa.
A highly distinctive and unusual moth, which rests with the wings folded longitudinally, looking very much like a withered autumn leaf - & has a wingspan of 45-50 mm

The adults generally fly between May and October, in at least two generations, but can be found in any month. The species is also a common migrant and can occur in large numbers at coastal & river locations - hence it being on the Bank of the Lea.

The angular markings provide excellent camouflage against foliage. The hindwings are whitish with darker venation. Two broods are produced each year, and in the British Isles, the adults are on the wing from May to October. This moth flies mainly at night and is attracted to light and sugar. It may often be seen during the day at rest on fences and garden foliage - or in our case - on the Recycled Gardens purple pots!

It occurs throughout Britain, commonly in places, and more so in the south. The larvae feed on a variety of herbaceous plants - which is why we are all finding the bright green blighters all over our plants!

Still - it is very Beautiful!!

How can you guys like all these creepy crawlies man?! They give me the heebie geebies!
Tony

I don't like bugs either Tone, but this one looks OK. Its them 8 legged ones I can't stand mind.
Su